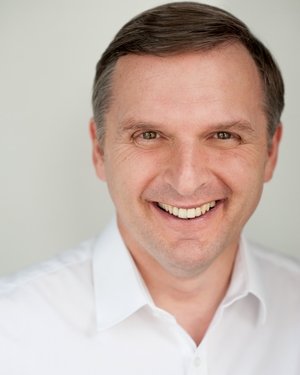 Welcome, Nigel!  How long have you been narrating audiobooks?

My first official audiobook was England’s Lane in 2013, where I shared the narration with the TV Actress Brigit Forsyth, most famous for the BBC series, The Likely Lads, but to me, as a Dr Who fan, I knew her from The Evil of the Daleks.

How many books have you narrated?

I have 50 on Audible.  I also have a few that made it to library CD Boxset, but for reasons of rights are narrated by other people on Audible.

How did you get into the industry?

I’ve been an actor since the mid 1980’s. I’d done various audio plays and had my audio showreels on professional websites, so I was absolutely delighted when Oakhill Publishing in the UK added me to their regular readers.

What did you do before you were a narrator?

I’ve almost always been an actor, even before leaving school.  My first professional appearance was at the age of 14 in 1980. I left college at the start of a course when I was offered an Equity Card to be in the local theatre repertory company. Since then, it’s been a long line of touring theatre, rep, pantomimes, small bits on television, a few leading roles in commercials, theatre in education and lots of pantomimes!

What have been some milestones in your career?

I wanted to be a serious actor, I “followed the money” and became better known for Pantomime Villains, but there are no regrets. I’ve worked with lots of famous people in lovely theatres doing great parts in good shows. I loved playing Toad in Wind in the Willows in the main Christmas show in my home town’s Lyceum Theatre. We are very lucky having a 700-seat, 1911-build beautiful theatre here, and playing the main role in the main professional Christmas show was a huge honour! I was very lucky to be cast in a series of German TV Commercials, so was flown out to Hamburg. But the only thing I ever brag about is being one of the original crew of the Spaceship Red Dwarf. 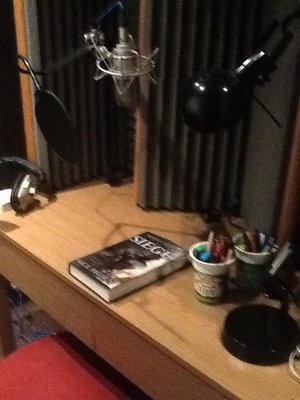 What’s a typical audiobook production day like for you?

I try to take each day like an ordinary working day. As I’m getting older, I no longer enjoy the living in cheap digs and endless driving involved in theatre work. So audiobooks are a fantastic addition to my career. I also want to spend more time at home with my wonderful other half, so I record and edit all day until about half-six, and keep my eye on requests for audiobooks for the rest of the time.

What aspects of narration are fun?  What do you love about what you do?

I feel that I am a bit of a rebel. I read a lot about how sound effects are undesirable, but as an actor I just want to make it more of a performance all the time, so my  favourite thing about narration is turning my straight reading into “3D”. Thankfully, although there is still a lot of resistance to sfx (sound effects), my experience has been virtually all positive, and I have no intention of going back to straight narration.

What aspects are not so fun.  What do you like the least?

The only bad things are the negative reviews. Sometimes they can be very personal and very hurtful. Some people say ignore them, but I think you have to read them; you have to take them into account; consider if they are fair; compare them to your other reviews; and decide what action to take. But always remember, you can’t please all of the people, all of the time.

What is your favourite genre to narrate and why?

I like the fantasy characters in supernatural books and sci fi. I’ve really enjoyed the historical action sequences in my Hornblower’s Legacy audiobooks too. These kinds of genres lend themselves better to the sfx/sound effects treatment that I put into my work, than, say, romance, for example, which would probably sound hilarious if I added sfx to them. So I won’t be going in that direction, even though they seem to sell extremely well. 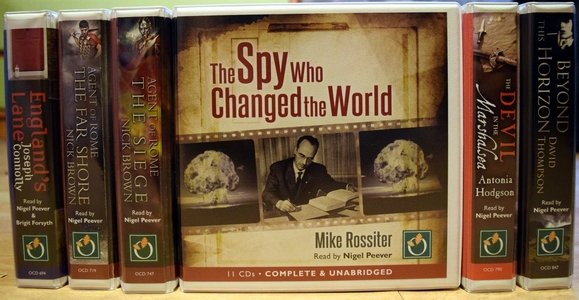 How much input do you get from the author of a book you’re narrating?

Very little, thankfully. Most authors are very trusting. I had one in which the author took a very active role in the production, and consequently, the production ground to a complete halt, as every line, every character, every sound and every pause was scrutinised, and re-recorded over and over. In the end I think we’d made it to chapter 5 of 19, and things got very ugly. I finished the book and presented it as a whole. They refused to listen to it without being able have their extensive input and micro management. I tried to get a kill fee; they refused… so I lost a lot of time and money on that one.

How do you go about voicing different characters?  What decisions do you make regarding voices to use?

I keep a log of characters when doing my first read-through, and list any accents, ages, gender, speech defects like stammers, mannerisms like military brusqueness, etc, etc. I try to cast the production in my mind, as this helps me remember who is who, so even though they may not be impersonations, if I can picture a particular actor in a role, I can emulate their mannerisms. Certainly, some of my favourite actors appear in almost every book I narrate, since I do good impersonations of Patrick Troughton and Tom Baker. Tom Baker played Sherlock Holmes for the BBC, just as Jeremy Brett started his fantastic Granada TV series. So since I love Tom Baker as an actor, I decided to play Holmes with his voice. Now, either my impersonation isn’t as good as I think it is, or Sherlock Holmes fans haven’t seen Tom’s BBC series, but I get a lot of stick for that!

Is yours a creative job or a technical job, do you think?

I think my job is largely creative, but because I don’t outsource my editing, (I’m too much of a control freak to get the effects how i want them, so outsourcing could never work!), I have to know how to do what I want to do. Certainly, I feel the productions are improving every time, as I learn to do new stuff, technically.

Do you love or hate doing foreign accents?

Accents are the lifeblood of the characters. I think it is so important to be able to distinguish who is speaking in an audiobook. So I love doing them.

What advice would you give to anyone wanting to become an audiobook narrator?

There’s no magic bullet. It takes time to build up a workable portfolio, but be brave! If you’re confident that your productions are good, the royalty share route is the way to go. On average, you can make much more that the PFH rate.  (PFH is a payment Per Finished Hour of audio – meaning a payment up front for producing an audiobook, with no ongoing royalty component.) Yes, some will sink without trace, but the good ones will more than cover the shortfall.

What advice would you give to an author wanting to get an audiobook produced?

Unless you are absolutely certain that you can pay off your narrator with a PFH and sell your audiobook successfully by yourself, then find a good, experienced narrator, who is prepared to help you with making your audiobook become a success, who has a good track record, and isn’t going to disappear into the night after their first couple of books, never to be heard from again. 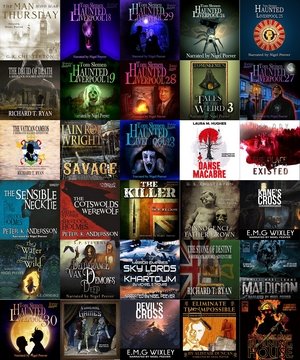 What’s the favourite book you’ve narrated so far, and why?

I’ve got two equal favourites: The Water and the Wild by K E Ormsbee, an utterly charming magical children’s book with great world building, and The Electric by Andrew David Barker, which is a coming-of-age supernatural ghost story set in an old cinema, where I had to create new films with Humphrey Bogart and Boris Karloff.

What are you narrating right now?

AudioFreebies.com thanks Nigel for making himself available for this exclusive interview. 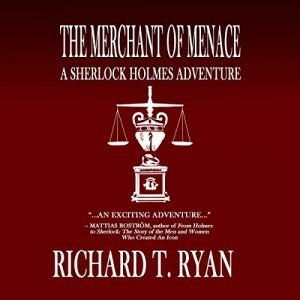 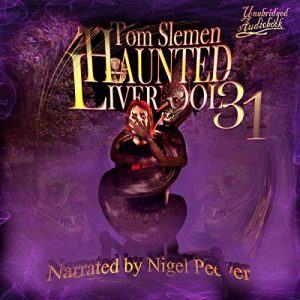 *10 audiobook offer* *Enhanced Narration with music & sound effects* Request all ten anthologies (over 120 hours’ listening) from the Haunted Liverpool Series of tales of the supernatural. Haunted … 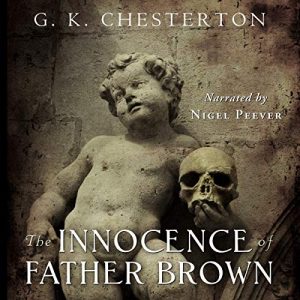 Celebrating the 100th birthday of the world’s favorite amateur sleuth, Father Brown! This is a new edition of the first collection of G. K. Chesterton’s masterful mysteries, The Innocence of … 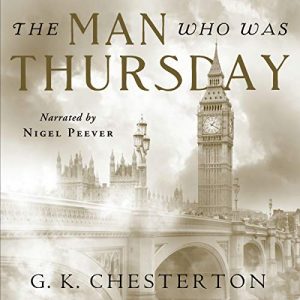 The Man Who Was Thursday: Centennial Edition

Secret agents, Edwardian London, a discourse on poetry and the London Underground: what other book could bring these disparate parts into a cohesive whole in this loved British classic. … 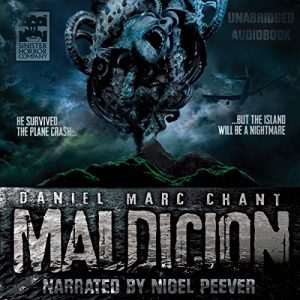 *Enhanced Narration with music & sound effects* Dexter LeGrasse thought he was lucky to be alive. He was wrong. The only survivor of a plane crash over the Atlantic, … 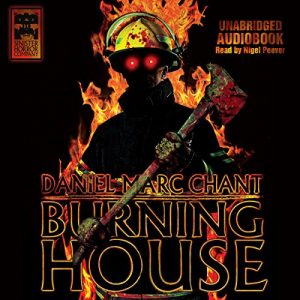 *Enhanced Narration with music & sound effects* They’re trained to fight fires. Now they have to fight for their lives. In a run-down part of Newstead Haven, an apartment … 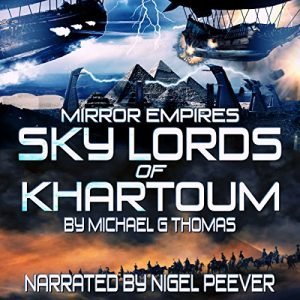 *Enhanced Narration with music & sound effects* Welcome to the Mirror Empires, where reality is distorted, and war threatens to engulf the world. It is 1898, and soldiers armed … 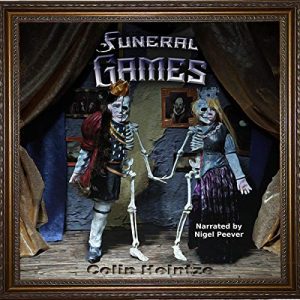 *Enhanced Narration with music & sound effects* Ingerval is the Country of the Dead. Despised by the wider world, blighted by history, since the beginning of time, it has … 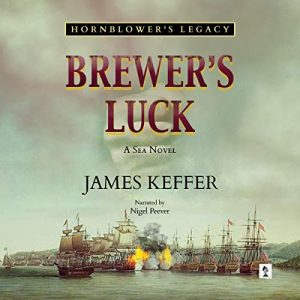 *Enhanced Narration with music & sound effects* *Other titles in this series also listed* After gaining valuable experience as an aide to Governor Lord Horatio Hornblower, William Brewer is … 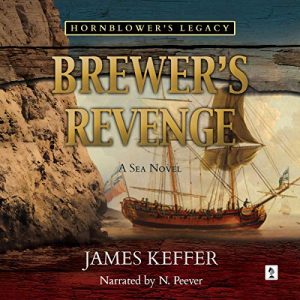 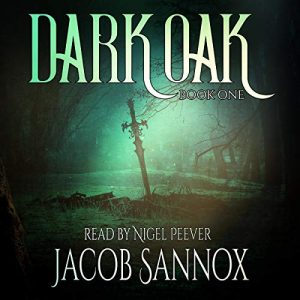 Humanity has finally defeated the Dark Lord, but Morrick fought on the wrong side. Though he was a slave, he is branded a traitor and must earn the trust … 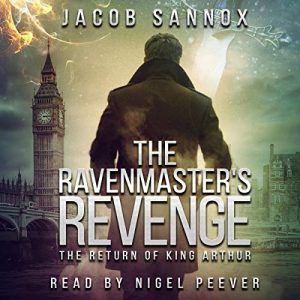 The Ravenmaster’s Revenge: The Return of King Arthur

It is the autumn of 2019. Merlin’s wayward apprentice has escaped from the tower of London with his raven familiars. Legend foretells that the white tower, then England, will fall. … 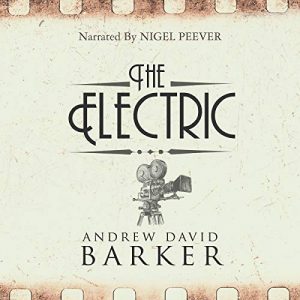 In the summer of 1985, 15-year-old Sam Crowhurst discovers an old, abandoned cinema that screens movies made by ghosts, for ghosts. Sam and his friends Emma and David find … 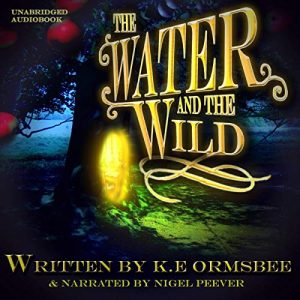 The Water and the Wild

“I loved everything about this book!”  “Wonderful”  “Entertaining and engaging right from the start.” For as long as Lottie Fiske can remember, the only people who seem to care …